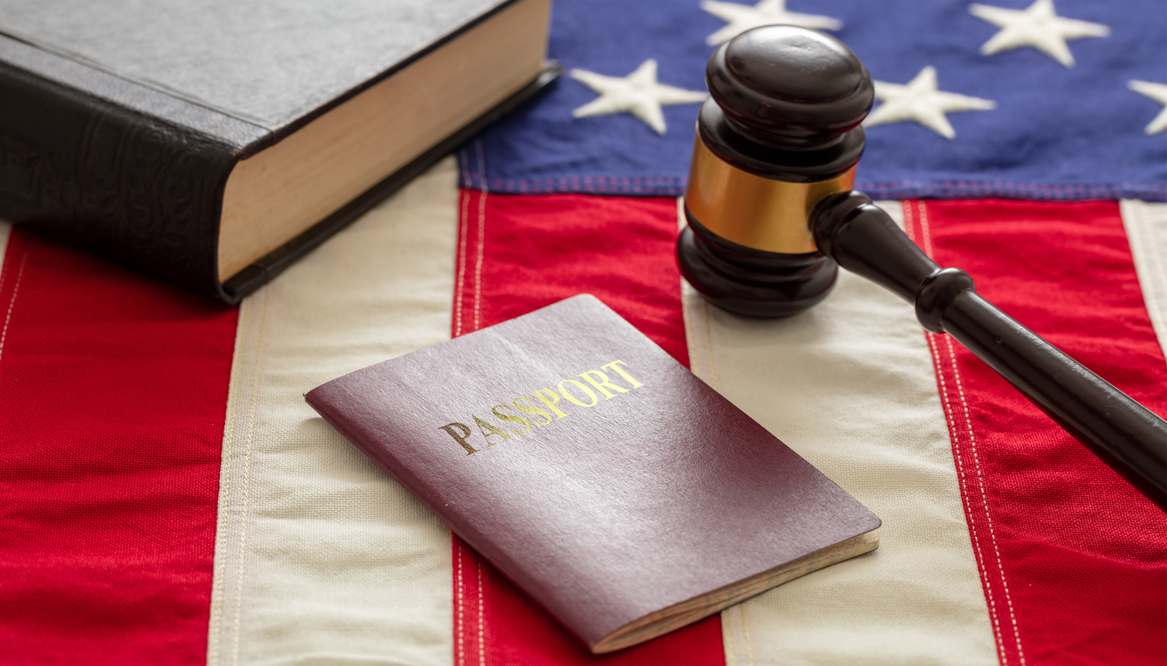 Existing gaps in citizenship protections increase the vulnerability of citizens because of their race, national origin, religion, political opinion or a combination of factors. The power to deprive or deny citizenship can even lead to statelessness – when an individual has no nationality at all – rendering affected individuals without protection and subject to all manner of human rights abuses.

Equal U.S. citizenship is affected—and in many cases, imperiled—in the following areas:

Denaturalization: The revocation of U.S. citizenship acquired through naturalization. The Department of Justice prosecutes cases under two federal statues (civil and criminal).

Denial and revocation of U.S. passports: The Department of State initiates these administrative actions. Affected individuals can challenge passport cases through litigation in order to prove their U.S. citizenship. Passport denials and revocations impact both naturalized citizens and citizens by birth.

Political attacks on citizenship by birth: Policy proposals surrounding rhetoric regarding the status of children born in the United States to non-citizens.

In 2017 and 2018, countries with some of the highest representation in denaturalizations were Mexico, Haiti, and Nigeria. In his rhetoric, President Trump has demeaned these countries, among others. Nearly half of all cases filed targeted citizens whose country of origin is a “special interest country,” which reflects the U.S. government’s decision to impose collective suspicion on individuals based on their country of origin alone. These findings suggest U.S. citizens are being targeted based on their national origin, as a proxy for race, ethnicity, and religion.

The Trump administration filed three times as many civil denaturalization cases filed (29.5 per year) than the last eight administrations’ average (12 per year). In April 2019, the Department of Justice described the increase in referrals for prosecution as “staggering.” By all publicly available accounts, criminal denaturalization cases also rose, to an average of 51 per year.

These include: no right to counsel in civil proceedings (25% of defendants have no representation); the routine inclusion of broad waivers of immigration defenses in settlements and plea agreements (these agreements abandon possible asylum claims and protection from remove when defendants would face torture); no protection against removal during appeals, meaning defendants can be removed while they are still defending their case; and the lack of any statute of limitations in civil proceedings.

The Trump administration is seeking to increase budgets for denaturalization as an immigration enforcement tool.

In its FY2019 budget, the Department of Homeland Security proposed the transfer of $207.6 million from United States Citizenship and Immigration Services’ (USCIS) Immigration Examinations Fee Account—the fees paid by people in order to naturalize—to ICE for denaturalizations and other immigration enforcement measures. In a FY2020 budget plan released in March 2019, the Department of Justice Civil Division projected an “ever-increasing” caseload in a bid fo increased resources to match demand.

The Department of State retains undue discretion in revoking or denying passports and remedies for affected citizens are inadequate.

When the Department of State decides to question an individual’s citizenship, it is empowered to demand unlimited additional proof of U.S. citizenship. When efforts to furnish such proof fail and individuals are denied or deprived of passports, they face substantial financial and legal hurdles to seek redress. The number of passport cases in South Texas has increased since 2017 and more resources are being devoted to defending the agency’s actions.

The Department of State has failed to implement recommendations by the Office of Inspector General after is recent investigation of passport denials.

A 2016 investigation into passport denials affecting Yemeni-Americans revealed a woeful lack of coordination and oversight within the agency, including an absence of documentation on how policies are developed and applied.

Why is naturalized citizenship fundamental to American democracy?

The United States is home to over 21 million naturalized citizens. Naturalization is a crucial tool for integration of immigrant communities and the vibrancy of American life. Under the Fourteenth Amendment’s Citizenship Clause, U.S. citizens born or naturalized in the U.S. are equal under the law and hold the same rights.

These are just a few hundred cases – why should it matter for millions of naturalized Americans?

The hundreds of naturalized citizens fighting in U.S. courts today are canaries in the coalmine. Massive resources are being mobilized to torment a minuscule fraction of the U.S. population with insufficient procedural safeguards in place to check abusive practices. These practices are unwise. Their true purpose is opaque at best, and they ultimately destabilize the security of citizenship for all Americans.

Taking away someone’s passport (or refusing to issue one) can have the same practical effect as denaturalization – leaving the affected person without the ability to leave or return to the U.S. if they are abroad. In the Rio Grande Valley, affected individuals who have lived as U.S. citizens for decades suddenly find themselves stripped of their passports and struggling to afford the costs of going to court to prove that they are, in fact, Americans. The current administration is breaking with past practice and now defends these cases regardless of the merits, rather than settling, and in the process is wasting resources badly needed elsewhere.

Born in Brownsville, Texas, Maria grew up in Reynosa, Mexico. In her final year of high school, she had a serious boyfriend, Antonio, but also serious intentions to achieve a college degree. Maria moved to Edinburg, Texas, where she studied accounting, earning first a bachelor’s degree and then a master’s degree.

Maria and Antonio started to plan their future together, beginning with a wedding in Texas. Maria applied for a fiancé visa for Antonio, and the two of them, plus Maria’s mother, traveled to the U.S. consulate in Ciudad Juarez for interviews. But during the interviews, Maria’s mother was taken away and interrogated for two and a half hours. Denied even a sip of water, she was browbeaten and insulted: told to admit that Maria had not been born in the U.S., and told to admit that she did not even know who Maria’s biological father was.

Antonio’s visa was denied and he was forced to remain in Reynosa. Instead of starting their new life in Texas, Maria moved to Mexico, where she and Antonio were married. She commuted daily to her job on the U.S. side of the border. In January 2017, as Donald Trump was taking office, Maria was stopped at the border and her U.S. passport was confiscated. Later, she was told the revocation was due to the existence of a Mexican birth certificate in her name. But since she does not have a Mexican birth certificate, Maria has another theory: “Just having a Hispanic last name…that’s all you need for them to be triggered to investigate you,” she says.

Finally, in January 2019, after fighting the U.S. government in court, she was able to get a new passport. Today, Maria is four months pregnant. She knows that Antonio will not be with her when she is due, and she will have to deliver their first child alone. But she is as determined and optimistic as ever: “I’m really looking forward to starting a family and seeing my kids grow up here…I really love the U.S.”

Maria’s story is not an anomaly. The lack of adequate legal and policy protections has led to targeting and state-sanctioned profiling based on race, gender, and class, with disastrous consequences for targeted communities.

Political Attacks on Citizenship by Birth

In October 2018, President Trump suggested that he could sign an executive order that would reinterpret the Fourteenth Amendment’s Citizenship Clause to take away the right to U.S. citizenship for children born to non-U.S. citizens on U.S. soil. Such proposals are not new and experts have discredited them given longstanding Supreme Court precedent. Rather than revisiting these legal debates, the focus should be on the implications of the President’s proposal alongside his administration’s embrace of the nativism, and other destabilizing practices. A comparative case study of citizenship in the Dominican Republic strikes a note of caution: mass retroactive citizenship stripping can and does happen, resulting in legal chaos and untold hardships.

RECOMMENDATIONS TO THE UNITED STATES CONGRESS

Impose a moratorium on both civil and criminal denaturalization (8 U.S. Code § 1451 and 18 U.S. Code § 1425) until the adequate independent oversight and statutory safeguards recommended below are in effect.

Refuse funds to the Departments of Homeland Security and Justice for denaturalization until these departments can demonstrate compliance with the oversight and safeguards below.

Use all available oversight mechanisms to publicly expose the policies, procedures, and processes by which the Departments of Homeland Security and Justice investigate and prosecute U.S. citizens for denaturalization.

Enact legislative reforms to address protection gaps in the denaturalization statues, including:

Adopt legislation prohibiting denaturalization where it would result in statelessness.

Amend the civil denaturalization statue (8 U.S. Code § 1451) to eliminate its most harmful features by: including a statute of limitations, providing for a Sixt Amendment right to counsel, establishing a heightened standard of proof, eliminating denaturalization in absentia, and significantly narrowing the available grounds for denaturalization.

Invalidate immigration waivers, including judicial removal orders and waivers that relinquish asylum and other protection claims, in negotiated settlements.

Respond to evidence of discriminatory denaturalizations and passport processing by commissioning a disparate impact study and conducting oversight.

Enact legislative reforms to address inequality and discrimination in access to U.S. passports, including:
Establish a right to counsel for any action challenging an executive decision denying access to rights and benefits on the grounds that the individual concerned is not a U.S. citizen.

Amend legislation to require a heightened burden of proof on the government to prove non-citizenship where it seeks to deny or revoke a U.S. passport.

Amend 8 U.S. Code § 1503 to clarify that it provides optional remedies that do not preempt judicial review under the Administrative Procedures Act (APA).

Use oversight powers over the U.S. Department of State:

To ensure that the Department is providing notice of the intention to revoke or refuse to renew a passport and a meaningful opportunity to refute evidence provided to support denial or revocation.

To prevent the Department from delaying passport renewals when an unexpired passport is presented.

This factsheet was originally published with The Open Society Justice Initiative. It uses the law to promote and defend justice and human rights, through litigation, advocacy, research, and technical assistance. Working as part of the Open Society Foundations, our staff are based in Abuja, Berlin, Brussels, The Hague, London, Mexico City, New York, Paris, Santo Domingo and Washington DC. For more information about the Open Society Justice Initiative and to download the full report, please visit: osf.to/unmakingamericans